The zombie [customer] apocalypse is here. And retailers can end it.

The memes you see online about the zombie apocalypse? They aren’t memes. Go to a shopping mall. Go to a university. Go to a new stadium. What do you see? Digital deadwalkers, the zombie army…all of us wandering along with our heads in our phones. We are the zombies.

It’s so acute, that along with millions of “derps” daily with people walking into things and/or each other from having their heads in their phones ‘cause that text or that meme or that post or that whatever is waaaay more interesting than… well… interacting with the physical world you’re walking through.

If you want to see this rise to its logically absurd conclusion, go to a shopping mall.

What’s the point of maze-like shopping malls and complex window displays? Sales and promotions? Food courts? It’s to get you to spend more time and money than you intended to. It’s the same reason grocery stores put the milk at the very back.

The strategy is simple enough: the more things people look at, the more ways you distract them, the more likely you are to get more money out of them.

But, retail… sweet, beautiful, stupid retail. What have you done to yourselves? Right around the time smartphones were becoming popular and those giant public touchscreens got cheap enough to be shoved in every possible location, malls adopted a very interesting approach: you could download their app or reference their handy touchscreen-based directory to direct you straight to the store you were looking for. In fact, some apps featured turn-by-turn directions so you could stare down at your phone (along with the rest of the zombies) and not look up until you were right where you wanted to be.

This was a gigantic success. For the first time, customers could arrive at a shopping center, accomplish exactly what they had set out to do, and get back to their car the picture of efficiency.

Yet in retail in general and malls, in particular, we need people to browse and to linger. We need them to look at another window, walk in another door, hang out in the food court. Anything in addition to their stated purpose for being there.

In an effort to build what ended up being a reasonably good customer experience, retailers forgot the small detail of making sure that their “improvements” actually helped the bottom line. 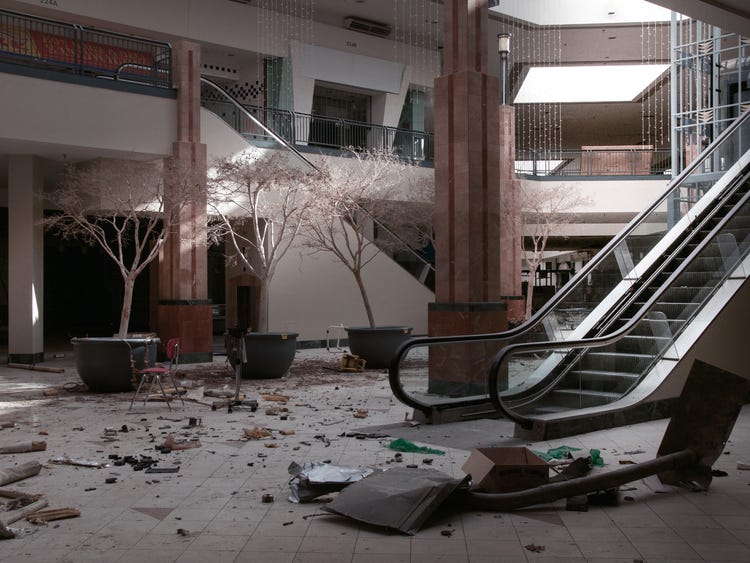 Shopping malls made themselves irrelevant. The browsing experience in person is generally more enjoyable than it is online. But they killed browsing. Additionally, shopping malls have always functioned as a new form of the old town square. You met, you socialized, you interacted. That was part of the draw of going to a mall. With the creation of the zombie army, we killed that aspect of the mall experience.

Weirdly, we’re seeing other industries adopt the same approach. But the challenges are higher stakes than retail. Wayfinding apps for hospitals. That’s exactly what a hospital needs, yes? A bunch of freaked out people (no one goes to the hospital when something is going well) running into each other or into medical professionals busy caring for the sick or the injured, plodding along with their heads and eyes on their phones.

With the technology available to us today we can create environments where people lift their heads up. Where we can use digital in the form of multi-viewer screens, smart signs, beacons, and hyper-focused audio to guide people through spaces in a way that has their heads up. So they can see the world they’re in. And the people populating it.

Experience is important. Innovation is important. But sometimes it helps if these things actually support the businesses that spur them onward.

Want to hear more from Rik Reppe? Subscribe to Newton’s Other Apple

“Leadership Cannot Be Taught… It can only be learned”

How I learned leadership… From an actual Rockstar